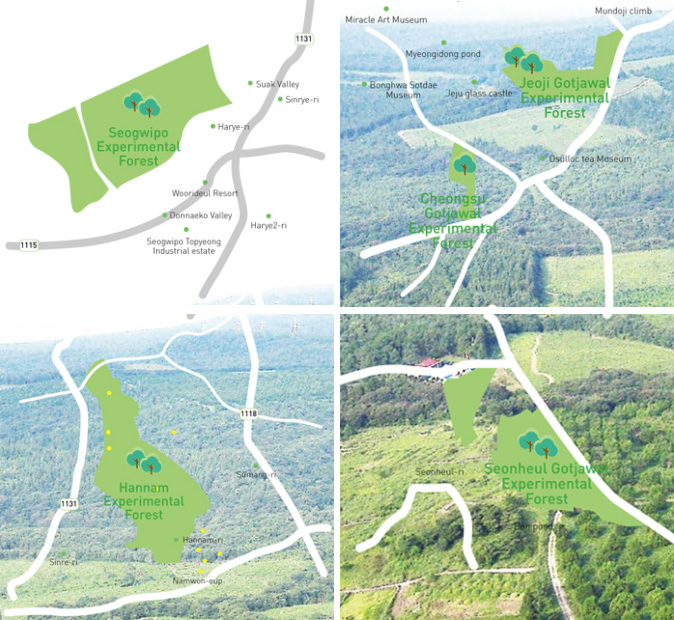 The forest is located on the southeastern side of Mt. Halla with an altitude of 300-750 m a.s.l.. The terrain in the forest is flat except the areas of Saryeoni orm(parasitic volcano, 524 m), geoinak (529 m) and maboonak (425 m). The forest holds the averaged annual precipitation of 3,000 mm and temperate, warm-temperate and subtropical climate patterns. The dominant trees in the forest are evergreen trees including Quercus acuta, Castanopsis sieboldii, Neolitsea acicularis and Daphniphyllum macropodum and deciduous trees such as Carpinus laxiflora, Quercus serrata and Styrax japonica. Some of plantations of Japanese cedar remains with a sporadic distribution.

The forest is located at the foot of Mt. Halla with an altitude of 500-900 m. It adjoins Seondol valley of Namjeju-gun to the east, Mt. Halla national park to the north and is situated between Siorm to the west. The south northern side of the forest has a steep slope and the east western side has a mild slope.

The total area of Gotjawal, a lava forest, is 110 ㎢ accounting for 6% of the total land area(1,875 ㎢) of Jeju island. It is widely distributed in the eastwestern part of Jeju island and divided into four regions: Gujwa-Seongsan and Jocheon-Hamdeok regions in the east; and Hangyeong-Andeok and Aewol regions in the west. The Gotjawal not only retains a high degree of biodiversity and a unique ecosystem but also has been closely related to the life of local communities. Accordingly, it is considered as a natural heritage to be preserved. A total of 300 ha (2% of the total Gotjawal area) of Gotjawal have been designated as experimental forests by KFRI since 2011. The forest is located in the two Gotjawal regions, Jocheon-Hamdeok region(178.7 ha) and Hangyeong-Andeok region (121.1 ha) 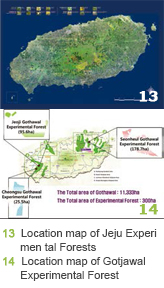 01 Establishment and management of educational forests
02 Management of the Sustainable Forest Management(SFM) model forest
03 Management of biodiversity hot-spots in the warmtemperature and subtropical forest zones
04 Monitoring and conservation of forest ecosystems in response to climate change
05 Exploration and conservation of traditional forest-related culture and knowledge in the Gotjawal
06 Research on ecosystem processes, forest productivity and changes of carbon balance in the Gotjawal

Establishment and management of educational forests

Management of biodiversity hot-spots in the warm-temperature forest zones

Monitoring and conservation of forest ecosystems in response to climate change

Research on ecosystem processes, forest productivity and changes of carbon balance in the Gotjawal